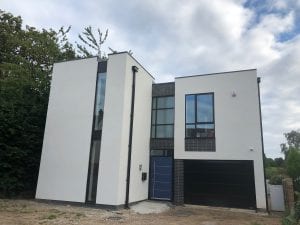 According to the owners Andy and Sarah Ball, Number 41 is the most talked about house in Derby! Their ambitious self-build of a modern eco house was completed in June 2019 and according to the couple, they love the feature glazing from Jack Aluminium.

Daniel Evans at Matthew Montague Architects was keen to get as much natural light as possible into the property, especially at the front of the house which faces north.

All the glazing in the house is big, and there’s a lot of it. Ceiling heights are set at 2,765mm which meant that most domestic systems couldn’t cope with the height. Andy called Jack Aluminium to ask what commercial options were available that would complement the domestic glazing used for other windows and doors.

There were several areas that they needed to sort. The first was at the front where Daniel designed the glazing with some clever light wells to create a striking feature that looks like it’s one column for the entire height of the house. Allowing the glazing to go from the floor to beyond the ceiling height in both the study on the ground floor and again in the upstairs bedroom. The effect is amazing from both inside and out. Inside it allows in the very last of the sun before it sets, which means maximising the amount of natural light entering the rooms. It also means that as you look out of the windows, more sky is visible giving a feeling of more space. On the outside the minimal framing in Black (RAL 9004) allows the glass to be the key feature, which looks stunning against the white render.

The second area was the glazing above the front door in the guest ensuite bathroom. It ended up being the last piece of the glazing designs that Andy and Sarah agreed. They really wanted to use our JCW curtain walling system, but we needed a separation between the entrance door below. They came up with the idea of putting relief brickwork between the two. In other areas of the house they had used black bricks in, very appropriately, a Jack on Jack pattern. By using black mortar, it maintained the monochrome effect that worked perfectly for this modern house. In fact, such is their attention to detail that the position of the mullion is millimetre prefect with the bar handle on their aluminium front door.

This meant that the curtain walling would fit perfectly. A six-pane design was created to line up vertically with the bricks, and horizontally with the window in the adjacent bedroom. It is more than perfect and finished with satin glass for privacy. On the inside, the frames have created a stunning effect and offer the extra benefit of some useful shelving.

We were also able to help Andy and Sarah with the glazing in the downstairs loo and a small ensuite to the side of the house. They wanted opening windows in both of these, and although the glazing is very tall and slim, the design of our window system has given them what they needed.

All Jack Aluminium glazing used at Number 41 was expertly fabricated by the team at AluFoldDirect and delivered to site.

Although it’s a very modern building, there’s nothing stark or compromised at Number 41. The sheer amount of glass in the property allows in so much natural light

They haven’t restricted themselves to use one glazing system throughout. By having all the frames in black, everything marries up beautifully. The total effect of the glazing in the property makes it a very special home and we wish Andy and Sarah many years of enjoyment!